Nuclear Family is a gripping piece of interactive theatre which follows Joe and Ellen, nuclear plant workers and siblings, faced with an imminent disaster. Audience members will be privy to what could possibly be their last hours as they struggle with the biggest decisions of their lives. In a heated round table discussion, the audience will experience the pressure of making life and death decisions. 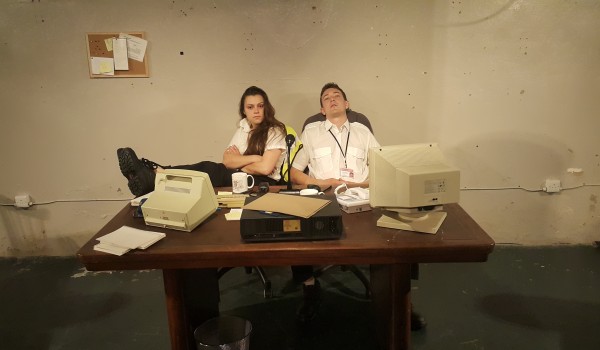 To have any chance at understanding why people do the things they do, you have to put yourself in their shoes. Nuclear Family is immersive, interactive theatre that requires you to do just that. The play begins with an introduction by a suited convenor, who explains that you are part of a board of inquiry into an explosion at the Ashtown nuclear power plant in 1996. For the next hour, your decisions are linked to those of two security guards and siblings Joe and Ellen Lynum, who work in the plant. Audience members are seated around the cast and the set – a grim, bunker-esque security office with a desk, some 1990s PCs, telephones, and other peripherals. Joe and Ellen are at the sharp end of the unfolding disaster and the focus is on their decisions, which happen to be yours.

The audience members were taken ‘inside the tunnel’ as events unfolded, watching the ‘video footage’ – the acted scenes. After each superbly acted scene leading up to a critical decision point, we were given short audio recordings of interviews and some documentation, such as police and employment records. We had two minutes to make a binary choice decision: what would be a reasonable or appropriate thing to do next, given the information available and the desired outcome? As an audience, we had to vote on a collective decision. These decisions – four or five in all – were moral dilemmas. Questions of rule-breaking, relationships and competence arose, and each decision had implications, for liberty and loss of life, for instance. Each decision contributed to an unfolding disaster, but the decisions were set against poor management – under-resourcing and reported problems that had never been acted on.

As the audience made each decision, we could not know the consequences until they arose. It was clear that were various routes through the mess and because of this we probably forgot that the ending was actually certain: an explosion. It became a chose-your-own-disaster, but one where we were fooled into counter-factually thinking we could mitigate the outcome and maybe prevent it. We felt the regret and anger for each decision in real time as the next scene unfolded.

This is innovate theatre that teaches the audience about local rationality. The audience, like Joe and Ellen, do what seems reasonable at that time. In hindsight, each decision seems like a bad decision, but at the time each decision is just that: a decision. The decisions seemed reasonable to most people, though there was minority dissent for some decisions, which was not explored. Interestingly, the minority could feel some anger that their preferred option was not taken: even though the consequences of neither option were known at the time, the unknown consequences of the unmade decision seemed better.

The division of the storyline into decision points was reminiscent of the method within Sidney Dekker’s Field Guide to Understanding ‘Human Error’, which suggests breaking down a detailed timeline into critical junctures. But there are crucial differences between an accident investigation, Nuclear Family, and real-time operations. In an accident investigation, you have much of the information and you have knowledge of the final outcome and the outcomes of each decision. You construct the critical junctures (based on the knowledge you now have) and you have many hours or days available to analyse them. In Nuclear Family, you have a some background information and you have knowledge of the final outcome but not the outcome of each decision. You are told the critical junctures and you can pause for a couple of minutes while you make a decision. In real-time operations – in control rooms, cockpits, operating theatres – you don’t have all the information and you don’t know the final outcome, nor for sure the outcome of the decision you are about to take. You may not know in advance that a juncture or decision point is critical and you can’t necessarily pause for long to make a decision.

Understanding local rationality demands a level of empathy, and Nuclear Family cultivated both background empathy (or person empathy) into the characters, and process empathy for their moment-to-moment experience – cognitive, emotional, and social. It is hard to think of a better medium through which to experience this so efficiently than interactive theatre.

Human Factors at The Fringe

Human Factors at The Fringe: The Girl in the Machine

Human Factors at The Fringe: My Eyes Went Dark

This blog is written by Steven Shorrock. I am interdisciplinary humanistic, systems and design practitioner interested in human work from multiple perspectives. My main interest is human and system behaviour, mostly in the context of safety-related organisations. I am a Chartered Ergonomist and Human Factors Specialist with the CIEHF and a Chartered Psychologist with the British Psychological Society. I currently work as a human factors and safety specialist in air traffic control in Europe. I am also Adjunct Associate Professor at University of the Sunshine Coast, Centre for Human Factors & Sociotechnical Systems, and Honorary Clinical Tutor at the University of Edinburgh. I blog in a personal capacity. Views expressed here are mine and not those of any affiliated organisation, unless stated otherwise. You can find me on twitter at @stevenshorrock or email contact[at]humanisticsystems[dot]com.
View all posts by stevenshorrock →
This entry was posted in Human Factors/Ergonomics, Safety and tagged accidents, empathy, hindsight, human factors, local rationality, outcome bias, safety, theatre. Bookmark the permalink.

5 Responses to Human Factors at The Fringe: Nuclear Family